Why a post about Thanksgiving in February? Well, my blog purports to address revisions of history: fictional stories that convey more truth than fact, genealogical accounts that shift the focus of history from huge international events to the simple truths of everyday lives of ordinary people, and non-fiction work that blows us away with new discoveries in history, in anthropology and DNA, in science and how we comprehend the world and the universe. I’d like to comment on a quintessential part of American history that is absolutely ripe for revisionists–and not for the better.

Here is my how-NOT-to-revise-history polemic.

I believe that re-writes of history are a constant, as we discover more facts and as we find it desirable to emphasize certain aspects of that history to further our interests and beliefs in the present day. No single interpretation of history is ever going to be flawless or final, but that doesn’t negate the necessity of examining the past in new ways–on the contrary, I heartily believe in and encourage the existence of several versions of history existing and circulating at any one time.

HOWEVER. Having said that, I don’t believe we need to allow free-for-all revisions of our heritage to suit the zeitgeist of any particular group. On the contrary, a modern sensitivity to a pluralist view of what history’s lessons are or should be should make us that much more critical and careful about being as truthful and honest as possible. We have an age-old problem wherein our cultural attempts to redress the wrongs of the past sometimes lead us to allow the formerly-repressed voice to assert anything at all it wants–perhaps motivated by guilt or ignorance or just not wanting to be left out of the protest/party happening out in the street.

How not to celebrate a Quatercentenary

The year 2020 approaches, and with it, a 400th year commemoration of the foundation of Plymouth Colony. Already we have groups–some of them with a seeming-stamp of “official approval”–completely in denial of the notable values practiced in this Colony (but rarely in any other early European settlement attempts) and attempting to subvert what it is we’ve always celebrated about Thanksgiving, turning it instead into a day or mourning (for atrocities against Native Americans) and vilifying people like Governor Bradford (come on, do you even know what he generally stood for?!) –Strange, I generally genuinely like people who attempt to “subvert” anything! And I’m usually the champion of the politically-correct–at least the original goals of PC, before it became the free-for-all I decry above.

It’s become apparent that groups such as Plymouth 400 don’t speak for me; this isn’t political correctness, it’s misguided (all right, even malicious) distortion of history. We have nothing to learn from either extreme’s version of history, particularly when the purveyors of such versions behave so badly in the present. (You’ll have to Google around for some of the incidents at play in and around Plymouth, Massachusetts.) And we have much to learn from a historical look at why Thanksgiving became and stayed a national holiday in the first place. Hint: it wasn’t actually about blithely giving thanks and throwing around pumpkins and turkey drumsticks.

Give earlier Americans who selected Thanksgiving a worthy holiday some credit: we don’t celebrate Plymouth Colony because they were the earliest European colony; they weren’t. And we certainly don’t celebrate it because it epitomized white/native relations. Rather we still celebrate because it was the exception to the norm, an example of how integration should have been, and how it still could be if we only learn the lessons of history.

Why did the 1800’s “discover” the Thanksgiving holiday?

Remember, when the holiday was established and took hold later in the 1800s, our country was in the midst of increasingly ugly race relations; people knew it. Lincoln was responding to the ultimate human degradation, slavery. Out west whites were at war with Native Americans and atrocities were committed on both sides. The notion of genocide even became a possible vision for some. And often-violent prejudice met the most recent immigrants: Slavs, Chinese, Jews.

Given that backdrop we can see that celebrating the first Thanksgiving was NOT a quaint hypocrisy; it was a fervent wish by people weary with all the hate and violence that surrounded them.

Were there ulterior motives at play when Massasoit showed up with twice as many of his folks to the Plymouth colonists’ harvest bash? Sure, they wanted to let it be known they were watching. But hey, they brought food. Was there political maneuvering on both sides that first year, a search for alliances and allies? Of course, and that’s precisely the point: these people believed–and went on believing in spite of occasional individual mishaps–that this whole living-together thing could be accomplished without bloodshed.

Cut to the past century, as we continue not to learn the lessons from Plymouth Colony: Japanese interment, backlash against the latest immigrants, SE Asian or Hispanic or Muslim. . .You’d better believe I’m going to point out how ridiculous it is to equate Governor Bradford with the KKK or to turn Thanksgiving into a national day of mourning.

Well, given that there are some groups of people still fomenting dissent among the races, I guess I can see why they’re threatened by the vision of the First Thanksgivng after all.

Disclosure: I descend not only from Governor Wm. Bradford but also the mythological American love story, John Alden & Priscilla Mullins.
Disclaimer: I felt this way about Thanksgiving even before I found out I had ancestors on the Mayflower.

Reading suggestion:  Nathaniel Philbrick provides a good balanced example of all the voices preserved surrounding the impact of Plymouth Colony on the New World, and vice-versa:  2003. The Mayflower and the Pilgrims’ New World. G.P. Putnam’s Sons. That’s the young person’s version; I found it quite challenging enough! 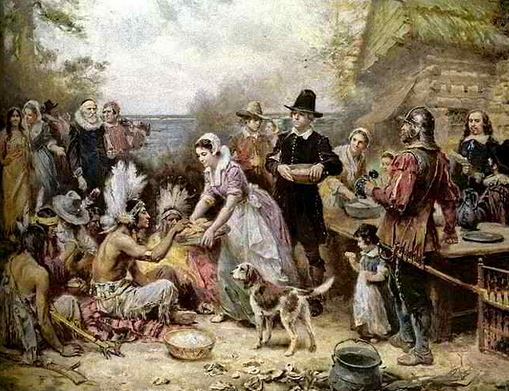